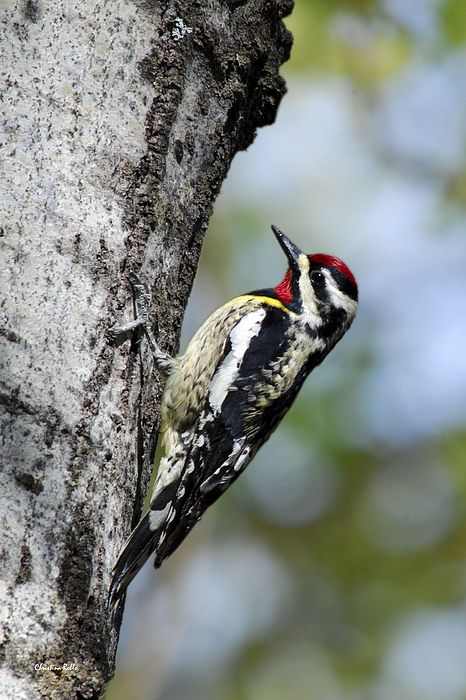 There is a large maple tree in our front yard. If you look closely at the trunk, you will notice horizontal lines of little holes all along the trunk. This is a sure sign that there is a yellow-bellied sapsucker in the area.

The yellow-bellied sapsucker (Sphyrapicus varius) reminds me at first glance of a little larger version of a downy or hairy woodpecker. [See my articles on the Downy Woodpecker and on the Hairy Woodpecker.] It is 8½ inches and mottled black and off-white. The male has a red chin and throat, while the female has a white chin and throat. Both have red crowns; although, you might notice some females with a black crown or a crown with just a few red feathers. Both have white shoulder patches that are easily noticed on their folded wings. Both also have a yellowish-colored wash on their bellies. They make mewing, rather catlike noises, or may sound a bit like they are whining; although, they usually tend to be rather quiet, timid birds. (I have seen one on my maple tree only a couple of times in the last 4-5 years.)

The yellow-bellied sapsucker breeds from central Canada eastward to Newfoundland and south to British Columbia. In the United States, its breeding range covers North Dakota, Missouri, central New England, and the North Carolina mountains, as well as east Tennessee, and northwestern Georgia. They winter throughout the southeastern portion of the United Sates and from Missouri east to New Jersey. They can also be found wintering in the tropical regions of the Americas. In fact, the yellow-bellied sapsucker is the only North American woodpecker that is migratory, with the females moving even further south during the winter than the males. (Some may, however, remain throughout the year in the more southern regions of their breeding range.)

During the breeding season, 4-7 white eggs are laid once. The female incubates the eggs during the day, while the male takes over at night. Incubation takes 12-14 days, and the fledglings leave the nest within 25-29 days. (The juveniles look very similar to its parents without any of the distinctive red markings on the head.)

Do not think that having a yellow-bellied sapsucker drilling holes in your tree is a bad thing. The holes will not harm your tree. (My maple is still standing.) In fact, they actually help the trees by eating a lot of the harmful insects that attack trees. (Yellow-bellied sapsuckers are particularly attracted to not only sugar maples but also apple and pear trees.) You might not see these woodpeckers as often as some of the other species of woodpeckers, but you will know if they are around by the neat rows of holes in your trees.

References:
The Cornell Lab of Ornithology/All About Birds. Yellow-bellied Sapsucker.